Royal Flush/Regal Planet
How a trio of disparate international artists find themselves as one, unified by a Philadelphia gallery’s urgent green life and a curator’s vision of diversity

A gallery of greenery and earthen life isn't 'the usual' when it comes to presenting or defining, what Russian composer Modest Mussorgsky titled 'the pictures at an exhibition'. The expectation of 'the gallery' is meant to be neutral, blank, cool: an empty vessel, a bare plate.

Yet, the warm, self-described mix of "fine art and horticultural experience" that is the aptly-titled HOT•BED in Philadelphia, and its newest exhibition "Regal Planet" – curated by James Oliver Gallery and Artmobia founder Jason Peng with horticultural design by Bryan Hoffman – breaks the mold and steams open the envelope of old, beyond that which fills its walls and floors. 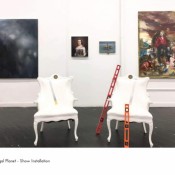 Start off with something warm/tactile to the touch, and all art that is presented – even the coolest – can't help but sear. HOT•BED is designed for such action. While its mothership at JOG is a minimalist's parade, H•B can thread its own themes, and tell richer, more organic stories.

For "Regal Planet" and its desired mix of naturalism, color, history and mystery, Peng has chosen three "radically different, yet somehow united," painters, in his words, to participate: Philadelphia artist Andrea Hornick, New York City-based Hisako Kobayashi and Japan's Tomiya Nishimura. Rather than separate them, Peng and James Oliver have allowed each of their works (some nestled on or by Hoffman's grassy knolls, bamboo strips and verdant fields in miniature) to co-exist with each other, to communicate. "If you look closely enough, it is almost as if each painting is talking to its neighbor," said Peng, with a sense of wonder.

While Hoffman stressed a sense of a "program’s connection to its staging," Peng moved that connection along so to link it to the virtual world and the viral curation that takes place at his communal Artmobia web-portal. "We're connecting people, not just art," stated Peng. "That's the core of who we are at Artmobia. And these three people, these artists, are stepping out from their own personal tradition to cross each other’s boundaries for their own new core."

Hornick is the most direct way into this new core, as her work – a favorite at the Barnes Foundation for exhibitions such as "Unbounded Histories" – is readily known to the locals, and dabbles in the often comic reference point of old masters with a new feminist tweak. Hers is a remix/mash up sensibility that finds Renaissance portraits re-contextualized in order to shift dialogue and critique (of its initial time and up through the present), to say nothing of its inclusion of manimal spirit guides and alluring alternate interpretations and titles in her work. Using a banner phrase, "Conflating Shamanic Narrative with Art History," muted palate paintings such as "Spotted Hyena Brings Lightness, which Yields Resilience and Understanding, to Rachel Levy Seixas by Mimicking her Laughs and Cries" burrows a hole into the viewer with its collective stares. Yet, Hornick's "Self-Portrait as Illuminated Woman With Pacing Donkeys: Allegory for Cycles of Life and Death," with its subject (a simpler line) looking away, and down with a skull upon her knee and mules at her feet, is no less potent or incendiary in its manner of address than Hornick's more ornate oils on canvas. You don’t have to stare a man down to kill him.

Tomiya Nishimura is also not so very new to Philadelphia aesthetes. Though born in Japan and educated in Spain, Nishimura has held solo shows in this city, his first at the Peng Gallery in 2003, and his next, dedicated to this city, 'Philadelphia' in 2006. Time in the United States has seemingly turned Nishimura's mien of hazily enigmatic works – where "Regal Planet" is concerned – into something starker, louder, but lighter, and one where his figures drift alone through their own psychic minefields. While a divine creation such as "La Tentation de Saint Antoine acted by Mr. Perlman, the Mathematician," is soft, fleshy and stoically reminiscent of the holy forms and figures of muralist Joseph Tiberino, "Regarding a Girl Friend of the Penguin, His Highness," feels driven by the commerce of advertising, the legendary Coppertone girl with her posterior naked to the world.

Throughout "Regal Planet," Nishimura's ecclesiastical figures and Hornick's revered Renaissance mashups are bound to each other by proximity, neighbors sharing secrets about the secular and the sacred. Blame and credit Peng and Hoffman for starting the conversations and giving them literal and figurative texture/context.

This leaves the distressed seasonality and dimensionality of Hisako Kobayashi whose spotted abstracts exist within the quiet musical line of Kandinsky and the molten apocalypses of Motherwell. With Kobayashi's four seasons, lyrically on display here, that which is eager to bloom and that which is doomed to fail face the same fine line, sublime femininity and dusky colorings. There is a calm and a sense of invitation to the splatters and bulbous blotches that clot "Gather All and Make Them One," and the series of seasons "Aki," "Fuyu," "Haru," and "Natsu." There is also a bleak and controllable tension to her work – a silent gloom that touches down upon "A Pot of Tea for All," that pulls a still, smoking condensation from mid-air.

Though disparate, Oliver, Hoffman and Peng have united - no, woven - the three artists of "Regal Planet" into a royal tapestry flush with fauna and topiary elements.

"The kinds of connections and relationships that we find in nature - for example with plants - work out best when they're not forced, or when they don't present a struggle," noted Peng. "This show reflects that. It's also how we hope for our online platform for Artmobia to function too, and we look forward to supporting more physical exhibitions through our network of artists, curators and galleries there. The more it grows, the easier it will be for us to support the 'growth' of exhibitions in all kinds of art spaces. All the shows won't have plants! But maybe more art shows should have plants?" 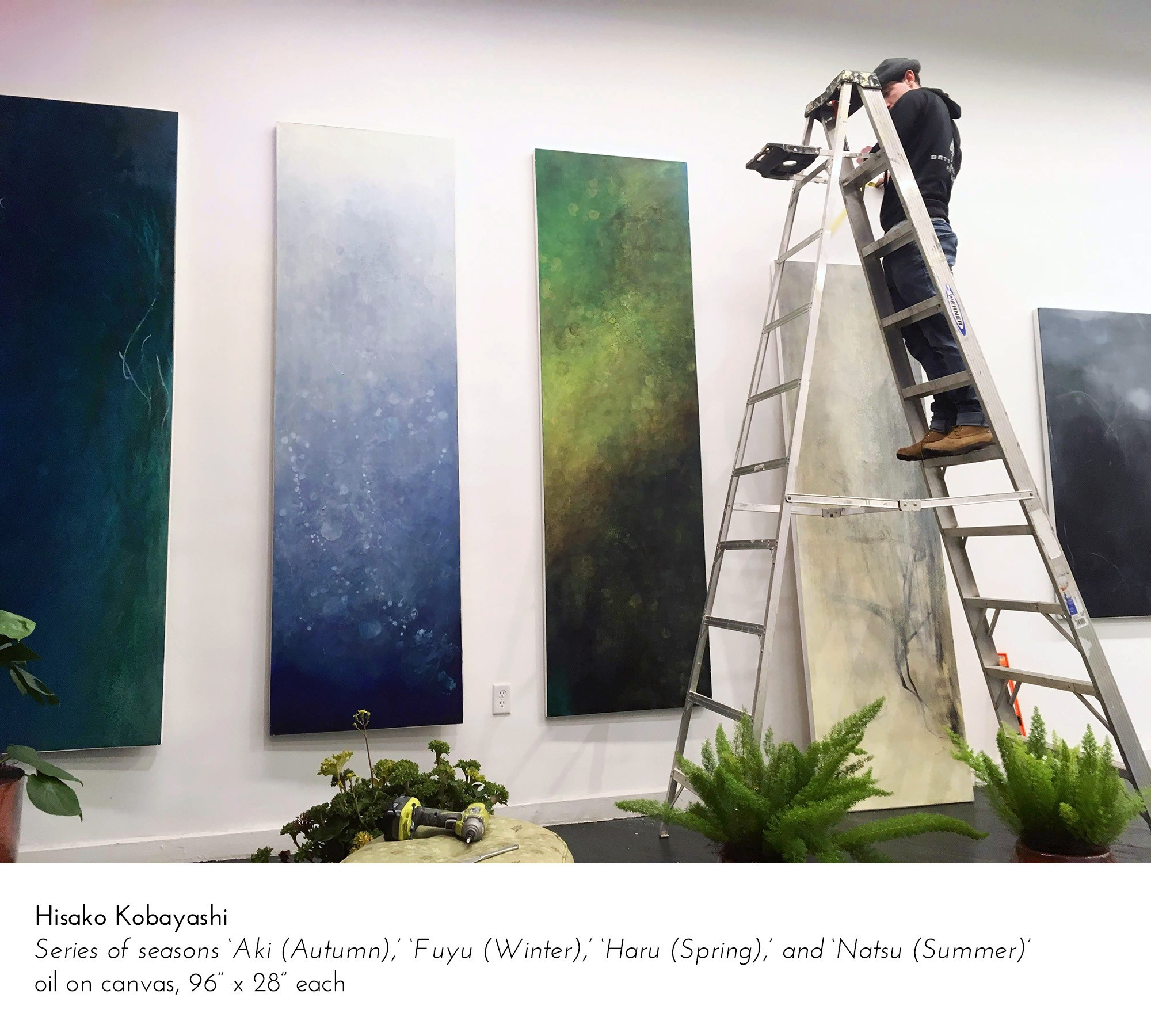 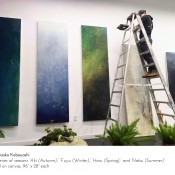 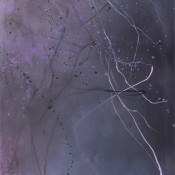 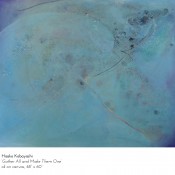 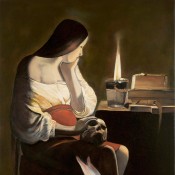 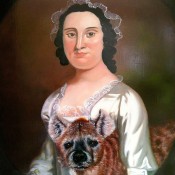 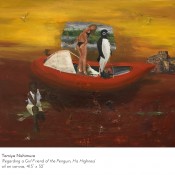 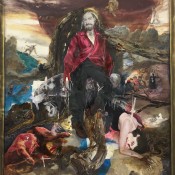 articles by this author

a conversation with thomas paul raggio

jeenho seo: the benefit of the doubt

toward the art of printmaking: a brief view